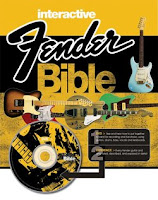 Kudos to the Stratoblogster: Congrats to the blogster for making the 500,000 hits mark... the Blogster says:

Wow! I just looked at the hit counter in my footer and discovered I went over 500K hits today!

This blog began in July '06 and currently has just over 1300 posts. It's been fun, I've learned a lot and made some friends too!

Most importantly, I also make good beer money from the affiliate stuff.

All from blogging about Strats and Strat accessories. Yup..

The Interactive Fender Bible is the ultimate multi-media package documenting the world's best-known electric guitar maker in both print and film.

The book contains details and specifications of every Fender guitar and amplifier made between 1945 and 2007 presented in a spiral binder for easy access -- handy when guitar shopping or trawling Ebay. The specially shot DVD documentary includes film of rare and unusual guitars from a previously unseen private collection. Author Dave Hunter and guitar legend Carl Verheyen demonstrate original examples of well-known models like the Telecaster and Stratocaster guitars, and Twin Reverb amps, and then pull some obscure curios from the vaults -- in doing so telling the story of the ups and downs of the best-known electric guitar brand on the planet.

This impressively packaged audiovisual guide to Fender's guitars and amplifiers is the one-stop shop for authoritative information, both enjoyable and trusted.

Carl Verheyen is one of the world's most accomplished guitarists. In a career spanning more than 25 years he has worked with figures as diverse as the Bee Gees, Stanley Clarke, Little Richard, Christina Aguilera, Glenn Frey and Cher, as well as being Supertramp's lead guitarist since 1985. In addition he performs and records with his own band. As well as playing, Carl writes widely and lectures extensively on music around the world.

Dave Hunter is a musician, writer and former editor of the British The Guitar Magazine. He has contributed to numerous publications and TV and radio documentaries, and is a leading reviewer of guitar amplification. His best selling books include The Interactive Fender Bible , The Guitar Amp Handbook , Guitar Effects , Play Acoustic and the Totally Interactive Guitar Bible .