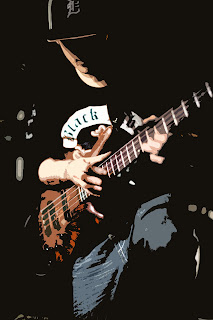 August 18, 2012 - New York, NY - Much to the excitement of bass players around the world, bass guitar virtuoso Brad Russell has released his debut solo album 'Let's Hear It!' on Steve Vai's Digital Nations label. Featuring guitar legend Joe Satriani, 'Let's Hear It!' explores musical frontiers where no bassist has gone before! Brad is a true bass hero and his debut CD is a solid sampling of creative cutting edge “lead” rock bass playing. Russell taps, slaps and shreds his four-string bass, sounding more like a six string guitar – fans of Billy Sheehan will not be disappointed. Brad's solos bring to mind Vai and Jeff Beck more than they do other bass players. Along with guitar great Joe Satriani, who joins Russell for a heavy shred fest, drummer Gregg Bissonette (David Lee Roth, Joe Satriani, Santana, Ringo Starr's All Star Band) provides rhythmic genius on all tracks.

Born in Detroit, Brad Russell (aka Russo) was raised in a musically diverse household. He recalls, “My brothers listening to everything from James Brown to Aerosmith and my mom spinning Bill Evans or Stan Getz records.” After studying acoustic bass in high school, Brad attended the University of Miami's school of music and received a master's degree. He later moved to the San Francisco Bay Area and worked for Shrapnel/Blues Bureau records producer Mike Varney. Brad has performed/recorded with a variety of artists such as: Mariah Carey, Clarence Clemmons, Greg Allman, Joe Walsh, Neil Young, Rick Derringer, Jack DeJohnette, Neal Schon, Joe Satriani, Lonnie Smith, Billy Preston and many others. Currently living in NYC, Brad has also performed for the Broadway musicals 'Jersey Boys' and 'Grease'. “I became involved with Digital Nations through my association with Joe Satriani,” Brad explains. “Since Joe played on my CD, I asked him if he could give a copy to Steve Vai and he did! Steve really liked it and signed me to Digital Nations.”

Throughout his debut release Brad continues to push the boundaries of the bass guitar. “I believe I'm pushing the edge of instrumental rock bass playing,” says Brad. “There are many great bass players out there today in jazz and fusion...but not too many bass players are taking the spotlight in a predoninantly guitar-based musical genre like rock. I'm also truly playing the electric bass like a bass 'guitar'. I'm using the tremolo bar on my bass and effect pedals like distortion and wah wah . In addition, I'm playing most of the parts a guitarist would play (chords, fast picking, tapping, etc), but on bass.”

“Brad is an amazing player with tons of creativity and really musical chops!” - Gregg Bissonette

In closing Brad has this to impart: “I'm trying to express the wide range of the bass guitar through my music. As well as playing the bass in a more traditional way, I'm trying to show the wide range of 'lead' sounds you can get out of the instrument and the different roles the bass can play throughout a song. I'm also trying to express that people can dig my music for its grooves and melodies and overall 'feel'... In other words, it doesn't matter if it's a bass player playing the leads or a guitar player, if it feels good and it ROCKS, that's all that really matters!”

“Brad Russell is one of the sickest bassests out there! He goes from 'Duck' Dunn to Stanley Clarke to over the top Steve Vai distortion fueled whammy bar riffs all within a few measures!” - Kinley Wolfe (bass player with the Cult, Lord Tracy, Shawn Lane)