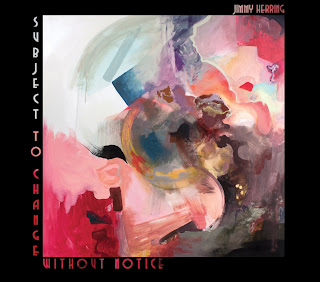 SUBJECT TO CHANGE WITHOUT NOTICE OUT TOMORROW


JIMMY HERRING, one of the most sought after contemporary American guitarists, will release his second solo album, Subject To Change Without Notice, tomorrow – August 21st - through Abstract Logix Records. As the founding member of The Aquarium Rescue Unit, Project Z and Jazz is Dead, in addition to playing with everyone from The Allman Brothers Band, The Grateful Dead to Phil Lesh and Friends, and Bela Fleck, HERRING has made his indelible impact on the music world. He currently serves as the lead guitarist for the very popular American Band, Widespread Panic.

This is Herring’s Wired, a snapshot of a stylistically unmatched guitar giant who not only has chops galore, but knows when to take his foot off the gas and tug on your heartstrings with tone and taste. - Premier Guitar Magazine 5 star review

Prior to releasing his first solo outing, Lifeboat, HERRING was known for his limitless improvisations, long flowing phrases, and highly charged, yet soulful, lead guitar that drew high praises from a diverse set within the musician community including Chick Corea, John McLaughlin to Dweezil Zappa. Throughout his early career, he plied his skills in multiple musical contexts, ranging from classically song-driven rock to technically demanding jazz fusion.

Now, with the release of his second album, Subject To Change Without Notice, HERRING has compiled eight original songs highlighted by the addition of amazing covers, including the Mahavishnu Orchestra’s “Hope”, George Harrison’s “Within You Without You” and Jimmy McGriff’s “Miss Poopie”. As one of the industry’s top-tier performance and recording guitarists, HERRING has once again illuminated the art form that transcends any categorization.