Jonathan Terrell: Not In The Face - rock blues 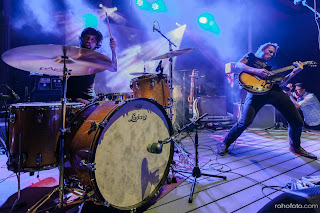 Not In The Face http://www.notinthefacerocks.com/

With roots tracing back deep into East Texas, Not In The Face is the real-deal. The type of band that you expect to hail from the unpretentious part of the Southgu. The soulful tint behind their "sludgy, no bull-shit" sound draws heavily from growing up in the land of Big Oil, back roads, and blistering summers. Singer and guitarist Jonathan Terrell was ushered into this world by a midwife in a crowded trailer. He grew up fast, riding horses, workin' ranches, and singing in church. He was raised on old school country and classic rock, molding his sound after the likes of Townes Van Zandt and Tom Petty. Drummer Wes Cargal was brought up in a truckin' man's home and spent his youth racing motorcycles across the country. He fed his love for music on the old school country, psych-rock fuzz and blues of bands and singers such as George Jones, ZZ Top, and Led Zeppelin, who inspired him to take up beating the skins himself.

In 2007, Jonathan headed to Austin, looking to take his music career to the next level. He began to make a name for himself as a solo artist, touring across the country and eventually opening for country legends such as Willie Nelson and Merle Haggard. Not long after, Wes followed suit with his own move to Austin, honing his drum skills by relentless touring with several bands and sitting in with such legendary acts as Alan Haynes and Dale Watson. The two re-connected in the prolific local Austin music scene, eventually forming the two-piece Not In The Face in 2009. What started as "something fun to do at a local bar for friends and free drinks" eventually took precedence over all their other projects.

Not In The Face started by melting faces the old-fashioned way, gaining attention with their unofficial SXSW 2 a.m. parking lot show that some critics claimed was "the best show of SXSW 2010." Then in January 2011, Not In The Face played during Austin’s Free Week, turning in what The Austin Chronicle called one of the "all time best shows EVER” at the legendary Austin venue Emo's, sharing the honor with such acts as Johnny Cash, Wu-Tang Clan, and Arcade Fire. Later in 2011, Electric Factory Records released their first album, Bikini. With echoes of The Sonics, Muddy Waters, Elvis, and Roy Orbison, songs from the album began receiving regular play on several radio stations across the country. Laurie Gallardo, radio-host at Austin's KUT 90.5, named the album as her favorite release of 2011, stating, "It never ceases to amaze me when all it takes is two great musicians to make such a big sound. High-octane, high-energy rock and pop from this dynamic duo. Excellent. Well done, lads."

In June 2011, Not In The Face took their live show on the road, touring from L.A. to New York and everywhere in between. Their electrifying high-energy live performances have gained them fans all over the country. Not In The Face is constantly writing new music and injecting their own unique sound into covers of old bangers by the likes of Screamin' Jay Hawkins and T. Rex, all the while putting more and more touring miles on the ol’ van. Not In The Face is setting out to light a fire and breathe the fun back into that good old-fashioned hot, dirty, and mean rock and roll revival. See ya in church.

Not In The Face! - "Brass Tacks" - Official Music Video