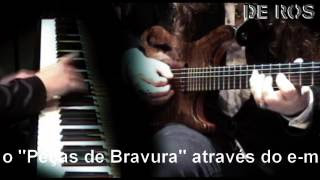 Saci (pronounced: [saˈsi] or [sɐˈsi]) is a character commonly regarded to be the best known character in Brazilian folklore. He is a one-legged black or mulatto youngster with holes in the palms of his hands, who smokes a pipe and wears a magical red cap that enables him to disappear and reappear wherever he wishes (usually in the middle of a dust devil). Considered an annoying prankster in most parts of Brazil, and a potentially dangerous and malicious creature in others, he will nevertheless grant wishes to anyone who manages to trap him or steal his magic cap. However his cap is often depicted as having a bad smell, most people who claimed to have stolen this cap often say they can never wash the smell away.

An incorrigible prankster, the Saci will not cause major harm, but there is no little harm that he won't do. He will hide children's toys, set farm animals loose, tease dogs, and curse chicken eggs preventing them from hatching. In the kitchen, the Saci would spill all salt, sour the milk, burn the bean stew, and drop flies into the soup. If a popcorn kernel fails to pop, it is because the Saci cursed it. Given half a chance, he will dull the seamstress's needles, hide her thimbles, and tangle her sewing threads. If he sees a nail lying on the ground, he will turn it with the point up. In short, anything that goes wrong — in the house, or outside it — may be blamed on the Saci.
Besides disappearing or becoming invisible (often with only his red cap and the red glow of his pipe still showing), the Saci can transform himself into a Matitaperê or Matita Pereira, an elusive bird whose melancholic song seems to come from nowhere. One can escape a pursuing Saci by crossing a water stream: the Saci will not dare to cross, for then he will lose all his powers. Another way is to drop ropes full of knots; the Saci will then be compelled to stop and undo the knots. One can also try to appease him by leaving behind some cachaça, or some tobacco for his pipe.
He is fond of juggling embers or other small objects and letting them fall through the holes on his palms. An exceedingly nimble fellow, the lack of his right leg does not prevent him from bareback-riding a horse, and sitting cross-legged while puffing on his pipe (a feat comparable to the Headless Mule's gushing fire from the nostrils).
Every dust devil, says the legend, is caused by the spin-dance of an invisible Saci. One can capture him by throwing into the dust devil a rosary made of separately blessed prayer beads, or by pouncing on it with a sieve [1]. With care, the captured Saci can be coaxed to enter a dark glass bottle, where he can be imprisoned by a cork with a cross marked on it. He can also be enslaved by stealing his cap, which is the source of his power. However, depending on the treatment he gets from his master, an enslaved Saci who regains his freedom may become either a trustworthy guardian and friend, or a devious and terrible enemy.