Nothin But Love is Cray’s sixteenth studio album and marks the latest milestone
in a career that has produced 15 Grammy award nominations (5 wins), over 12
million record sales worldwide, thousands of sold out concerts across the globe,
and even his own signature line of Fender guitars.

Produced with what Shirley refers to as “the dirt under the fingernails,” Nothin
But Love was recorded live over two-weeks at the Revolver Studios in LA. The
album features the soaring break-up blues of Won’t Be Coming Home, the jazz
chops of I’ll Always Remember You, the soul-drenched ode to repossession that
is Great Big Old House and the frantic ’50s-flavoured rocker Side Dish. 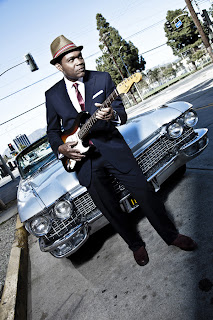 Since the release of his 1986 break-out album Strong Persuader, Cray has been
Blues rock royalty. He has performed and recorded alongside the best in the
business - from Eric Clapton to Stevie Ray Vaughn, from Bonnie Raitt to John
Lee Hooker. Cray was recently inducted into the Blues Hall of Fame at the age of
57; making him the youngest living legend to receive the prestigious honour.
ROBERT CRAY - ESSENTIAL WEB LINKS
Robert Cray – Official Website
www.robertcray.com
Robert Cray – Official Facebook
www.facebook.com/robertcraymusic
Mascot Label Group – Official Website
www.mascotlabelgroup.com