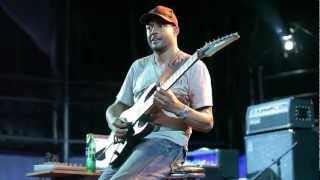 American guitar virtuoso visited the capital of the master class. Tony McAlpine - American virtuoso guitarist and keyboardist, multiple nominee for the "Grammy Awards", the legendary endorser Ibanez. During his quarter-century career, he produced, wrote and arranged eleven solo albums and four albums with his own fusion project CAB, three albums with the prog-rock team of Planet X, and participated as a guitarist and keyboardist on many recordings of various artists.