Alfredo Herz: on the tip of my tongue

Playing guitar with the tongue 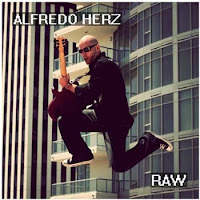 "This is definitely among the most creative shred oriented guitar records I've heard in a long time! Alfredo delivers a barrage of devastating yet tasty guitar performances on top of various fresh and exotic high energy compositions! 'Raw' is a must have for any serious shred aficionado!"

Background:
Born in the city of Orizaba and raised in Cordoba both in the state of Veracruz, Mexico, Alfredo began playing guitar at the age of 15.

Influenced by players such as Greg Howe, Jimi Hendrix and Slash amongst others, Alfredo would spend time playing with his friends without taking music seriously, until he decided to move to the U.S. in order to study it at Music tech in Minneapolis where he spent 2 years studying, attending seminars and practicing up to 8 hours a day which, led him to earn the "best rock guitarist" award.

Right after graduating Alfredo spent a few years playing on the road with all kinds of bands that ranged in numerous styles. In 1998, Alfredo was reviewed in the guitar nine records website as one the "undiscovered artists" for the month of September. Afterwards he took a trip to Easton, PA to study with his favorite guitar player: Greg Howe. Ever since, Alfredo has participated in, and won guitar competitions held in the Twin cities area by Guitar center and Mars music, and received positive feedback by internationally recognized guitar players and artists.

Not only as a guitar player alone but also as a band member he has won competitions and achieved honors that range from winning 1st place in his home state of Veracruz, Mexico at the "Yamaha-Coca cola music quest ’94", winning numerous "battles of the bands", live radio performances, and some of his bands have shared the stage with national acts such as: Cake, Helmet and Sixpence none the richer among others.

Alfredo is not only known for his technical skills playing the guitar, but also his versatility and high energy stage performance, which can range from playing in the back of the stage as a supporting musician to doing cart-wheels on stage, running and jumping around, playing with the tongue, with the guitar behind his head, with his fret board hand upside down and interacting with the crowd and band mates. He is also know for being able to sing lead and background vocals in English and Spanish, his work ethic, his respectful manners toward other band mates, his drive and his positive attitude. His understanding of music gives him the ability to be a music director, if need be. All the drums in his CD were programmed and edited by him (approximately 100,000 hits total), he played all instruments, produced, mixed and mastered it.

Alfredo has also been invited to give seminars at McNally/Smith college of music, and to write articles as a guest columnist for guitar magazines online such as: www.guitarnine.com, www.chopsfromhell.com, cutaway guitar magazine from Spain (www.cutawayguitarmagazine.com), and guitarz-for-ever (www.guitarz_for_ever.com). He has been partially involved in the editing for Greg Howe’s instructional video seminars (www.ghworkshops.com).

Right now Alfredo can be seen playing around Hollywood and doing sessions. His first instrumental CD “RAW” is now available on Itunes. Some of his tracks can already be heard in the shows "Guitar Radio" on KRVM 91.9 FM, Eugene/Springfield Oregon, "Let There Be Rock" Boschtion (Netherlands) Cable FM 87.5, and Radio FM 95.2, IMRadio.com and Global Radio Network.