CRASH THE SYSTEM project came about as a collaboration between songwriter Sören Kronqvist (former Finnish 400-meter hurdle champion and songwriter for Michael Bormann, HOUSE OF LORDS and CC ROCK, among others) and drummer/producer Daniel Flores (MIND'S EYE, THE MURDER OF MY SWEET) in the fall of 2008. The duo has known each other for a couple of years and they respect each other's work. Sören and Daniel decided to make a project together with songs they enjoyed writing. "The original plan was to make one song with Daniel and try to get that song out to a band or an artist. And, if it would turn out good we would do more together," explains Sören. "The first song we did was 'All Because Of You' and we both were really happy with how that song turned out. A few record companies also liked the song. We then recorded three more songs and got good response from them as well and that's when Frontiers came into the picture".

Thanks to Daniel's extensive music background, good reputation, and connections in the music business, he managed to bring in some of the top names in Sweden into the project. Guest vocalists include:

Other musicians that appear on the album: 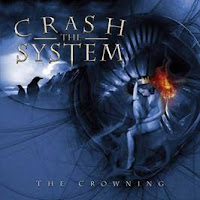