News:
16-01-2008:
Kaki King returns with her forth album after her contributions to Foo Fighters and Tegan & Sara’s latest albums, and having been nominated for an Golden Globe award for “Into The Wild” together with Eddie Vedder. 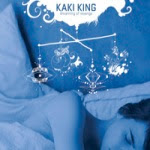 
31-10-2007:
Kaki Performs On "Later With Jools Holland" this Friday, November 2nd, Kaki will perform on the bbc tv show "Later with Jools "I'm really interested in myself aren't I great" Holland which airs at 11 PM GMT.

The show will air in the US later this year (and almost certainly will be up on YouTube very soon), but for now, please visit Jools' website for more info.

She'll be opening for The John Butler Trio.


19-03-2007:
Ms King has been around a long time and I thought it was about time that an appropriate items was set up. If you agree you can visit Kaki King is on MySpace: http://www.myspace.com/kakiking

Including Kaki King live at the Knitting Factory in Los Angeles, 09-25-2006


Until We Felt Red


These Are The Armies Of The Tyrannized

Background:
Kaki King has released three CD's to date and has been heavily featured on YouTube. Kaki King has more recently added electric to her original acoustic playing tapping style.

Kaki King was also featured on The Late Show with David Letterman, Late Night with Conan O'Brien and has also appeared at New Yorks, the Knitting Factory.

She lost her major record deal with Epic Records and has moved onto a more suitable indie label.

Check out her web site for more music and buy her CD's on-line.