"If you like extensive and aggressive guitar workm this album is a good addition in your collection. Firestorm is an instrumental album from a guitarist from Brazil. The sound quality of album is great for a self-release and is a good attempt to provide extensive and aggressive music to shred loving listeners. Although one cannot compare it with Malmsteen or Micheal Angelo Batio, and one should not try to do that. The CD starts with "Speed Rules" and picks up the tempo straight away. The best track is "Drug Dealers" followed by "Intense Guitar Playing" and "Beyond The Universe". There is a Brazilian flavor to this album, and that adds some verity as well. We highly recommend this album to everyone who loves guitar Instrumentals." 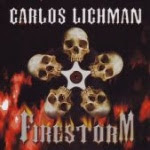 
17-12-2007:
A new Carlos Lichman CD. OK here's the scoop. The CD is entitled "Firestorm", features special guests Kiko Loureiro, Pablo Soler, Francesco Fareri and Jim Horne. The full details of the release are due to appear on http://www.carloslichman.com/ later this week. The track list is below:

Send an email to the email to carlos@carloslichman.com and you will receive all details to buy this CD.

Background:
Carlos Lichman was born in Porto Alegre City, Brazil. He began his musical education playing classical guitar. When he took up electric guitar he incorporated elements of jazz and fusion to to classsical playing style.

He recorded "Wake up the Dragons" EP with Neverland in 2001. Lichman then recorded a CD called "Planet Rock" in 2003. His latest release is "Intense Guitar Playing" a three song demo that focuses on Lichman's melodic guitar playing.

Check out the recent guitar9 interview and "Planet Rock" CD.