Catherine Delgadillo: fusing to another level

News:
09-02-2008:
Catherine Delgadillo should be feeling accomplished right now... she has been selected as the Guitar Player Zen's Featured Artist of the Week! ... plus Catherine likes the new Alex Argento CD, which are all plus points in my book!


12-11-2007:
Catherine Delgadillo is on MySpace: http://www.myspace.com/catherinedelgadillo 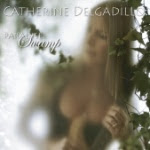 Catherine Delgadillo;s debut album Paradise Swamp is released, where you can check out tracks from the CD.

Background:
Catherine Delgadillo grew up in Sunnyvale, California. At the age of 9, playing and writing on the guitar soon became one of her favorite pastimes. Being primarily self-taught, Catherine has developed a love for playing guitar, singing, playing keyboards and writing music.

In 1989, Catherine joined forces with three guys also located in the Bay Area and formed the hard-rock band, Charade. As frontlady for the band, Catherine played guitar, sang vocals and was a contributing songwriter. Charade played many of the clubs throughout the Bay Area and opened for acts such as Gary Richrath (ex. R.E.O. Speedwagon) and Foghat. A few years later, Catherine decided to leave the band and shift her focus towards incorporating other styles of music in her playing and as a solo artist.

Catherine’s playing ability and style has evolved into a unique style of progressive rock and fusion which is the driving force behind her first solo instrumental CD, "Paradise Swamp".