09-11-2006:
A cool video guitar sizzle and cook out from Fabrizio Sgattoni on musicistiweb

Background:
Fabrizio Sgattoni was born in 1982 in Italy. He started playing guitar at the age of 14 and took private guitar lessons with Simone Settimi. After a couple of years Simone started working full time, so Fabrizio began studying on his own until the age of 18.

In 2000 he enrolled at the Lizard school of music and studied with Valerio Brachi until 2002. He then returned to college to complete his psycology course.

Check out his web site for samples of his playing 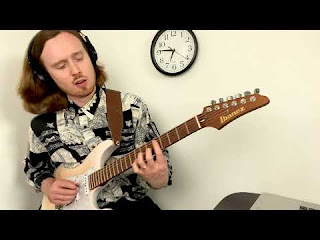