13-08-2007:
More super sounds for the competition. Scott Hughes entry for Greg Howe's "Play for Me" contest. Improvised on Brian Moore MC/1 into Xotic BB Preamp and thru Fender Blues Junior.

Scott Hughes - Play For Me Entry


23-01-2007: item first published
Background:
Scott Hughes is from South Portland, Maine, USA. He is one of the Northeast's busiest guitar instructors, providing 60 private students, as well as serving on the faculty of the University of Maine-Augusta music department, where he teaches guitar and directs the "Progressive Rock" ensemble.

Scotts' latest CD is available on guitar9 The In Between Phase 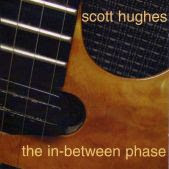