The blurb from Magna Carta

Dave Martone, featured in “Guitar One Magazine” Jan 2008 issue as one of the top 4 underground shredders in North America. New album, "Clean" available on Magna Carta on October 7th. 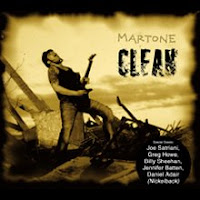 Martone . . . visiting what the future of guitar music would sound like.

If you thought that Canadian rock started and ended with Rush, Saga or Triumph, think again. Canadian guitar virtuoso, Dave Martone is a force to be reckoned with.

“I wanted the album to be playable by a 3 piece band, while not relying heavily on studio production techniques. I wanted more of a 4 on the floor vibe, with very strong melodies, and a more organic texture of sounds.”

All songs have Daniel Adair of Nickelback laying down the drum duties. "Nail Grinder" featu res a blistering solo from none other than Joe Satriani. "Hard Wired" features an amazing solo from Greg Howe. For "Dinky Pinky", Martone wanted a bass player that would kick hard. Billy Sheehan was, of course, the logical choice and he lays down an incredible performance. "Moron Face" i s a heavy riff tune with Jennifer Batten guest soloing.