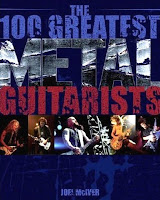 "The 100 Greatest Metal Guitarists" is a controversial and much-needed guide to the world of metal guitar, featuring the most accomplished performers from the vast legions of metal. As well as celebrating the classic metal musicians who have defined the scene since the 1970s, author Joel McIver delves deep into the modern thrash metal, death metal, black metal, doom metal, power metal and battle metal movements to unearth those players for whom no tremolo divebomb is too high and no tuning is too low. This book is no mere list for geeks, though. McIver's objective in writing this book is to recognise the incredible skills that these players possess.Moreover, although they're all masters of sweep picking, fretboard tapping and the other tricks of the modern shredder, these players are far from simple speed freaks. "The 100 Greatest"...makes a point of featuring players whose feel and instinct for the values of metal outweigh mere technical mastery. If you've ever wielded a tennis rack in anger in front of a bedroom mirror, or even if you're a metal musician yourself, you need this book - the world of the overdriven guitar will never look the same again.