George Bellas: step into the future

The ever prolific George Bellas is back, less than a year on from his previous solo album "Planetary Alignment" with his boldest and most progressive body of work to date in Step Into The Future. This new album is ultra-modern in style and really reaches out to a futuristic sound in its compositional sense and outlook. The album ranges from the explosive to the ethereal with emotionally stirring segments. Adding to its uniqueness Step Into The Future consists of just one song that is 76 minutes in length. George’s goal on Step Into The Future was to compose ultra-modern sounding music that used composition techniques that he had not previously used on any of his other releases. George comments, “I did not initially plan to write a 76 minute song, it just came out that way. I just kept writing and writing and as more ideas came to me, I eventually realized that this was turning into a behemoth of a song. Itt is composition in the truest and finest sense there is. I really strived for something that captivated my senses with ultra imaginative, highly unique, creative writing." Bellas is backed once again by the ultra impressive drum work of Marco Minnemann. 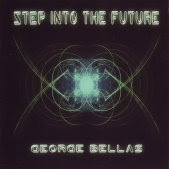