Are you the kind of player that has an emotional attachment to a particular instrument? 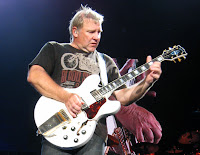 Well, my 335, my 355 and that Tele, and the first CE bolt-on that I got from Paul Reed Smith, as well the one I used for most of the 1990s and early 2000s, which again was a CE bolt-on—which is not their fanciest model. Those guitars right there are probably my most important kids, and I wouldn’t want to get ridof any of them. I’d be heartbroken losing the others, but…

oh, and a couple of these other Les Pauls that I have currently, because they’ve been set up exactly the way I want them. So I guess they could all go except for those.