on March 06, 2009
News:
06-03-2009:
An excellent interview with Dave Martone... as I watch Dave's live video no less! Featuring items about Jennifer Batten and Joe Satriani

Let me start with Joe. Well, I tried to get Joe Satriani to perform on a track for the last album, 'When The Aliens Come', issued in 2007 via Lion Music. Unfortunately, that didn't work out, and he left the door open for something in the future that might work out. I really wanted to finish recording this next record to see if I could get him interested in performing on a track. I think that was the initial spark that made me think of having these guests on the record. Most all of them I have worked with before, or have hung out with before. I met Joe in a studio in Vancouver while he was recording his 'Super Colossal' album. We first met then, through a friend of mine named Jane. I participated on a track called "Crowd Chant", and that was tons of fun. From there, we've done a wack load of videos for workshoplive.com called, The Satch Zone. With Joe, he just honestly needed to feel comfortable with the track, and fit in while being inspired by the track. After sending songs back and forth, he decided upon "Nail Grinder". 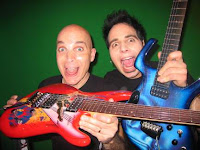 I think "Nail Grinder" is a cool, quirky track that has a very strong melodic form. I actually had two versions of the chorus for this song; the other version didn’t have as much harmony, and was quite a bit darker. I emailed the two different chorus excerpts to different people in the industry to see which they would select. I also posed this same question to Joe, but he said, “I can’t pick but I will tell you this, go with melody over technique since they (the people) will always be able to figure out technique". That might not be word for word, but that was basically the general idea. The darker version had more notes as well. I would say it was about 60% to 40% who favored the angelic chorus over the darker, technical chorus. After all was said and done, I picked the more angelic chorus that was full of melody, and Joe played an amazing solo in this song with great colors, feel, execution, technique and Joe-isms. For dynamics and delay settings, he also had quite explicit settings that he wanted. It was very nice to have this so I could make it sound exactly like he wanted after I imported his solo into my session. Joe is just simply an amazing talent and person, and I am so humbled to have him featured on 'Clean'. Joe's solo is really special. The changes are not your typical Satch changes, and he hit it out of the park. It has some minor third chord parallel harmonies, some diminished things, as well as a few other turns. He hits everything with passion, beauty, and some bravado. It turned out wicked. When I first heard his solo, my face melted for a few reasons. First, that's Joe freaking Satriani playing on my record. That took some mental healing time on my behalf, as well as my friends, to get over. Second, was because of the amazing kick ass solo he did. I am not worthy! I am not worthy! 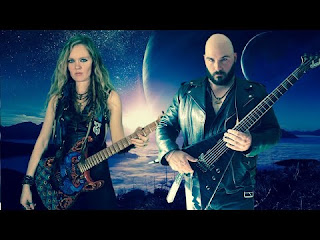