MAGNA CARTA UNLEASHES KRIS NORRIS PROJEKT’S ICONS OF THE ILLOGICAL
--- AN INSTRUMENTAL INVESTIGATION INTO THE MYSTERIOUS WORLD OF CONSPIRACY THEORIES
Did we really land on the moon? Was there a second shooter? Did Hangar 18 house alien bodies? For guitarist Kris Norris (Darkest Hour, Locust Factor), a self-professed “conspiracy buff”, the truth is out there. 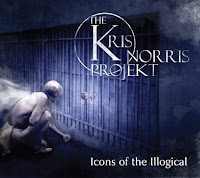 Icons of the Illogical, Norris’ first full-fledged solo record, is a collection largely composed of scorching and subversive progressive metal instrumentals inspired by the lure of alternative history and our willingness to believe in it.

“I don’t necessarily think these conspiracy theories explain the whole truth,” says Norris. “I think I’m more fascinated by the people who believe in these theories. It’s all a matter of interpretation and perspective. How and why do they think like that?”

Norris attempts to answer these questions throughout his 14-track record. Despite a lack of vocal accompaniment, Icons tells many tales with its tightly composed compositions and numerous soaring melodic lead lines. The music shifts in feel from aggressive to downright eerie, sometimes within the same song or guitar solo.

Tracks include the anthemic “The Law of Falling Bodies” (about the worst terrorist attack to take place on American soil and the crackpot speculations that have emerged as a result); the cynical and politically charged “The Hegelian Principle”; the sweeping, Wagnerian (and Arthurian) “The Wound of Amfortas”; “Lament, Requiem, Threnody”, a sly tribute to Metallica’s classic instrumental grandeur; the cathartic, deceptively complicated and highly syncopated “Ghostly Shell Removal” (featuring blood-curdling vocals supplied by Lamb of God’s Randy Blythe); the punishing “Remaining Foolish”, also featuring Blythe, whose harsh vocals seem to reinforce the militant nature and willing ignorance of some conspiracy theorists, “Palindrome” (appropriately based upon a repetitive lead line), and others.

“I tried to carefully pick song titles that fit the mood of the music but also reflected something about the general theme of conspiracy,” says Norris.

While Icons of the Illogical is a search and discovery for truth hidden in the outside world, the album also stands as one musician’s introspective musical journey, tracking Norris’ evolution from his early beginnings to his current status as a metal guitar maven.

“Everything you hear on this record has been written by me,” says Norris. “The new and the older riffs and musical concepts sit side by side to create a full picture of my development.”

Taking a cue from the improvisational methodology of Magna Carta’s own prog-metal supergroup, Liquid Tension Experiment, Norris let his passion (and fingers) fly when it came to recording these tracks, a process that took just two weeks to complete.

“I’ve always loved Liquid Tension Experiment and I said if I had the opportunity to ever record an album in a similar vein I would take it,” says Norris. “In my own way, I accomplished this by, basically, creating these songs out of thin air. When we went into the studio I let the drummer [Dave Gibson] hear a little bit of a song. We’d hit record and just play. We continued like that for the entire session. Then when we did the bass tracks with Dave [Fugman] we did the same thing. I loved working this way and, I think, the record has an immediacy, a real fire, because of it.”

Aside from Liquid Tension, Norris draws on a variety of musical influences, everything from the death metal of Children of Bodom to opera. These elements are evident in the song foundations and Norris’ bold and accessible solos.

“I remember listening to opera when I was in music school and I was thinking that the music being played under the voices was beautiful and truly amazing,” says Norris, who studied classical music before ever picking up the guitar. “I had the idea to approach this record as if it were an opera record without the voices. Really, my guitar is ‘the voice.’”

And as with any good composer, his multi-layered material reveals its treasures – its truths -- upon repeat listens.

“In one song I have something like twenty-five different voices moving in counterpoint,” says Norris. “You might not catch all of them -- or the ambient lead line floating in the background – when you hear it for the first time. That was the point, really. I wanted to layer the record so that you keep returning to the CD to find new elements with each listen.”

Give Icons of the Illogical a spin: what will you hear?