A teenager from Liverpool has reached the final of the world's largest guitar playing competition Guitar Idol 09. 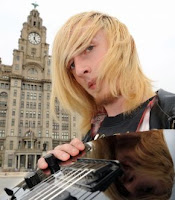 Jack Gardiner, 15, from Anfield, is the youngest British entry to make it to the final stages but he faces stiff competition from 119 musicians from around the globe.

Having already beat thousands of string strumming hopefuls, the talented teen is one step away from appearing on stage in the London live final.

But with most of the fellow competitors already being professional musicians and nearly double his age, they have a clear advantage in gathering votes from their already set-up fanbase.

The St Margaret's High School pupil was singled out by the judges for his 'exceptional' skill and 'faultless' playing but the judges only make up two thirds of what is needed to make the grand final.

Having held the record for Merseyside's youngest ever player to pass the classical grade one, Jack hopes to finish his GCSEs and eventually go to music school in Italy.

Jack said: "It has always been my dream to play guitar for a living and the competition could be my break.

"I have my heart set on finishing high school and eventually going to college in Italy to study music.

My thanks go to a number of people:
My Dad!

Kevin Price for lending me the Boss GT-5 so i could record this!
www.myspace.com/76deluxman

Martyna Karpinska for lending me the camera!

Karl Sweeney for being there for me man! (and for being such an awesome bassist)
www.myspace.com/fukaspoon

Kieran Doyle for editing a load of my text and taking all the amazing photos!
www.myspace.com/kierandoyle1992

Laurie Monk for the support and such! Check out his awesome website!
www.truthinshredding.blogspot.com

Daniele Gottardo for all the inspiration!
www.youtube.com/gottyboy

And the following for support:
Oliver King, Andy Graham, Unholy Divide, and all you others out there!