We join Steel Panther at the Key Club in Hollywood to find out about their highly anticipated debut album, Feel The Steel, who gets the most groupies and why The Goo Goo Dolls should suck their balls.

A track-by-track analogy of one of the greatest albums of 2009. 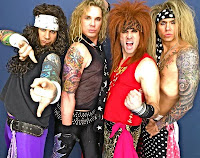 Steel Panther will release their riotous album ‘Feel the Steel’ on June 8th. They’ll also be playing Download and also taking in a special show at an intimate London album on June 16th.

For now though, you’ll have to make do with our track-by-track guide to the band’s kick-ass new album ‘Feel The Steel’.

Death To All But Metal
High-octane metal straight from the Sunset Strip’s heyday. Papa Roach, Madonna, Blink 182 and Sheryl Crow all take a kicking, but the Panther save their best lines for Kanye West and 50 Cent.

Best lyric: “50 Cent’s a fag, so is Kanye West/shooting hot sperm on each other’s chest/death to all but metal!”

Asian Hooker
Can you argue with a glam-metal stomp that rhymes South Korea and gonorrhoea? Nope, us neither.

Best lyric: “Find a geisha girl/Take her for a whirl/Wrap a tuna roll on my dick/And the bitch is on her knees”

Community Property
The first step into ballad territory is like ‘Every Rose Has It’s Thorns’ evil cousin. There won’t be a dry eye in the house after this one.

Eyes Of A Panther
Widdling like a cat after you’ve force-fed it Jack Daniels straight out of the bottle, this is a straight-up rocker that doesn’t contain the usual piss-taking.

Best lyric: Nope, they’re actually semi-serious on this one.

Fat Girl
A lament for a woman with a penchant for doughnuts. Pure Whitesnake, it’s worth noting that while the tunes here have lyrics that are fucking hilarious all the way through, the songs themselves are killer.

Best lyric: “I want to choke on that body if you’ll only let me in/I want to sink my summer sausage into that double chin”

Eatin’ Ain’t Cheatin’
It’s a fair point, isn’t it? We can’t imagine that it’d hold much weight as your girlfriend chases you down the road with a lead pipe though.

Best lyric: “She rocked my stick and I blew my load/But right after honey, I came home”

Party All Day
If Jon Bon Jovi hears this, he’s going to shit out his spleen in anger! The Sambora-baiting guitar solo is one of the greatest moments on the whole album. If only Bon Jovi still sounded this good…

Stripper Girl
This could be a huge worldwide smash that ends us up as a stadium ballad…if they allowed songs on the radio where the lyrics eolved around strippers and cocaine.

Best lyric: “Sometimes you think that I’m a jerk/When you catch me fucking your friends from work/I’ll be there to catch you when you fall/If you buy me a cellphone you can give me a call”

The Shocker
Strutting like a peacock with a boner (do peacocks get boners? Answers on a postcard…), The Shocker is the best pop-metal song to ever be written about an extreme sex position.

Best lyric: “Two in the pink and one in the stink/That’s called The Shocker!”

Girl From Oklahoma
An acoustic ballad to end the album in the ‘More than Words’ vein of things. Quite frankly, if you can hear this song without LOLZing at any point, you have some serious issues.

Best lyric: the whole bloody thing. Every line on it is absolute gold.

Steel Panther will release ‘Feel the Steel’ on June 8th.

Steel Panther are set to play a show at the tiny 229 club in London on June 16th. The band’s LA shows at the Key Club have become the thing of legends and this is sure to be one of the best shows of 2009.

Tickets go onsale at 9am on Friday morning (May 15th).

Steel Panther will play at this year’s Download festival.

Steel Panther - Behind the Music