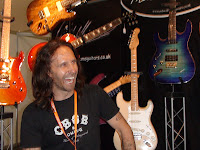 A great time at the Robin Williams guitar stand... these guys really know how to build guitars, but they're fun with it too!

Rob Williams has been building guitars and basses to rave reviews since 1984. His career began with John Diggins at Jaydee Custom Guitars in Birmingham. From there he went to the USA, teaming up with Hideo Kamimoto as a warranty repair technician for most of the major US brands including Gibson, Fender and Ovation. 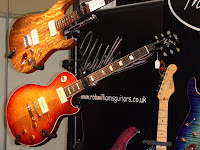 Returning home in 1990, Rob set up the very busy guitar repair shop at Musical Exchanges in Birmingham until 1992 when Rob was taken on by Patrick Eggle guitars as a technician, rapidly rising through the ranks to become Technical Director. In 1995, having gained considerable experience and expertise, Rob embarked on a solo project, setting up ‘Woodworm Music Products.’ 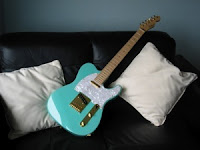 Now trading under his own name, Rob is still producing top quality custom built guitars and repairs as well as offering hi now standard models including the much raved about CS4 guitar. 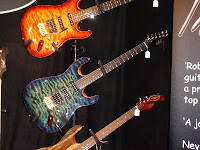 I caught up with George Marios at the Robin Williams stand. We's been out the night before and the day after we were looking for stands for the guitar idol guys to jam on. George was gushing over the quality of this Robin Williams guitar, he loved it! The guys at the Robin Williams stand were brilliant and were more than happy for the guys to jam on the stand, I really felt like lending George the money to buy this guy as he was so in love with it! Check out these awesome Bristih guitars at http://www.robwilliamsguitars.co.uk/