Having released two instrumental releases, guitarist Milan Polak took his music to another level with the release of his 2007 record, Straight, an album that "keeps the true sound of hard rock in full force," continuing the stance of "keeping the spirit of the real guitar hero alive," but making us get up and shout as well; and with his second vocal record, Murphy's Law (Lion Music); it gets personal lyrically - in a world that isn't perfect.

"I wouldn’t say it was a decision. I guess, it’s just the way I write and compose… Only this time I wanted to create a more modern sound and also implement more of the guitar virtuoso aspect again," begins Polak on the continuation of the singer/songwriter meets guitar shredder mantra, "When I wrote “Straight” I wanted to get away from the instrumental, guitar hero image. I really wanted to make this clear so I stripped down everything - no effects, no over the top guitar playing, hence the title and the cover of me naked with just my guitar. This time I wanted to take it from there and move on, resulting in a more modern sound using loops, adding more backing vocals and last but not least bringing back the virtuoso aspect of my playing."

Plus dangerdog review the CD. 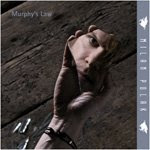