COMPETITION: Shred this - help is on the way with that key! 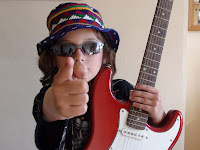 If you looking for some help with that backing track and which key to play:

From Wikipedia, the free encyclopedia http://en.wikipedia.org/wiki/B-flat_minor

B♭ or B-flat minor is a minor scale based on B-flat, consisting of the pitches B♭, C, D♭, E♭, F, G♭, and A♭. Its key signature has five flats. The harmonic minor scale would use an A♮ instead of A♭

Its relative major is D-flat major, and its parallel major is B-flat major. Its enharmonic equivalent is A-sharp minor.

B-flat minor is traditionally a 'dark' key."[1] Some important oboe solos in this key in the orchestral literature include the second movement of Tchaikovsky's Symphony No. 4, which depicts "the feeling that you get when you are all alone", in Tchaikovsky's words. Tchaikovsky's Piano Concerto No. 1 is also in B-flat minor.

The old valveless horn was barely capable of playing in B-flat minor; the only example found in 18th century music is a modulation that occurs in the first minuet of Franz Krommer's Concertino in D major, Opus 80.[2]