Rob Chappers: gets interviewed about his signature ml1 guitar 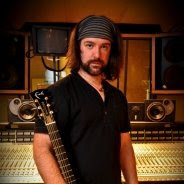 The project was undertaken in partnership with guitarist Rob Chapman, named ‘The YouTube Guitar Guru’ by Eddie Kramer, legendary producer/engineer of Jimi Hendrix and Led Zeppelin. Chapman is known as 'The Monkey Lord' to his many online fans and is regularly ranked in YouTube's top five most viewed musicians in the UK, with millions of hits since he began posting guitar videos.

Chapman caught the attention of Barnes & Mullins when it noticed that his videos were receiving 10,000 views per day from his loyal social network following. It was at the LIMS show that B&M director Bruce Perrin first saw Chapman at work.

“I was amazed that almost everyone recognised him,” recalled Perrin. “He was followed to the Faith Guitars stand by dozens of his fans as his crew filmed him. I realised there and then that we needed to work together to mutual benefit and the Rob Chapman Signature guitar was born.”

also a monkey minion does breakfast with the monkey lord... lucky blighter!

Breakfast with the Monkey lord