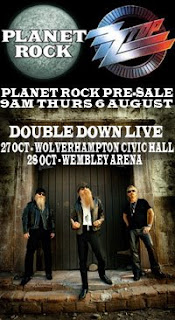 ZZ Top head to the UK for just two dates this winter as part of their Double Down Live tour - and Planet Rock has a 24 hour pre-sale so that you can get your hands on the best seats in the house.

Anyone that saw ZZ Top at Download Festival this year will know that they have lost none of their fire, swagger or cool and after 40 years still rock as hard as anyone else.

UK dates are becoming increasingly rare for the band, though, so when the band land in Wolverhampton on 27 October it will be a fantastic opportunity to see the band close up and in one of the best venues in the country.

The following night (28 October) the band make their journey south to the iconic Wembley Arena for what will surely be a triumphant return to the capital for the first time in several years.

So if you want to make sure that you do not miss out on what will be one of the best and most anticipated set of UK dates this year then head to the link below and get your hands on some tickets before the general public get a chance.