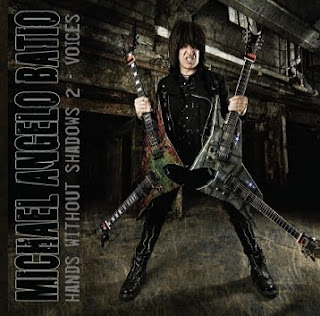 “Hands Without Shadows 2 - Voices” is an all vocal CD of amazing renditions of some of Michael’s all time favorite songs and artists. The album begins with “Tribute to Dimebag.” This version is so intense and ferocious, you would think that Dime himself played the rhythm guitar tracks. Michael adds his signature lead guitar playing to every song making these renditions truly unique and all his own. Virtuoso drummer Joe Babiak performed on the entire CD as well as new comer Warren Dunlevy, Jr. on vocals. Warren is a truly great singer. When you listen to the record it is hard to imagine that just one singer sang all of the songs. Warren’s voice seems to change to sound like a completely different singer on each song. Some of his vocal highlights are “Symphony of Destruction” where you would swear that Dave Mustaine was singing, or “EVH” where Warren really captures the essence of David Lee Roth. What Michael does on the arrangements is seamlessly weave many different Artists songs into one cohesive and unified track. These are like “MAB style Mashups!” Special guests on “HWS 2 - Voices” include “Creed” and “Alter Bridge” guitarist Mark Tremonti, “UFO” guitarist Vinnie Moore, solo artist George Bellas, “Exit the Ride” guitarist Bill Peck and “DSG”guitarist David Shankle. Michael has 3 Shrapnel Records alumni on this CD. MAB, Vinnie Moore and George Bellas have all been on records released by Shrapnel and all 3 of them are featured on the song ”Symphony of Destruction!” Triple the virtuosity on one track! Michael has also added, as a bonus track, an instrumental song with solos performed by members of the MAB Forum! MAB Forum member Maxwell Carlisle wrote and recorded the track. “I feel that this is a great way to get the fans involved as well as feature new guitar talent” quotes MAB. Michael performs the ending solo on the song. A sincere thanks to Max and all of the MAB Forum members and MAB Forum “shredders” that are on the track.