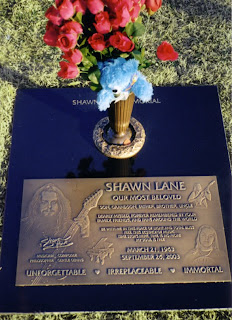 A reminder to all Shawn Lane fans, we're fast approaching the sixth anniversary of the late great Shawn Lanes's passing. I would like to thank Diane Lane for writing to me and I wish her and the Lane family all the best over this difficult time.

Thank you so much for your beautiful letter. I will cherish it.

Hopefully the Merchandise page will be reopened in time to order for the holiday season. Shawn has the best fans in the world.

September 26 is rapidly approaching, and will mark the 6th anniversary of the day Shawn walked on to another dimension. Please think of him and perhaps play some of his music on that day. I am asking his fans all over the world to have a quiet thought of Shawn at 5:30 Memphis time (Central Standard Time). We, his family and friends, will be at the Memorial Park cemetery that day celebrating his life. He is missed and loved so dearly. His music lives on.


In the meantime Raphael Fraser, says:

As a tribute to Shawn, I will be collecting together the various covers of his
Music I can find on YouTube, including mine, and recording another on the day (Gray Pianos Flying).

I urge everyone to think of Shawn, and on Saturday to listen to – and play – his music.

Or check out the archive to the legend: http://www.youtube.com/user/myshawnlanevideos including a list of Shawn Lane covers
Raphael Fraser Shawn Lane