October 20, 2009
You can almost touch it... you can feel it... it's building... the Monkeylord battle drums and rattling... the web site is starting... the anticipation is building, Monkey Fest 2010 "The festival for guitarists" is on the way

A mini Glastonbury for guitarists!! Set in the stunning countryside of Wiltshire in the UK, live music, great fresh food and air, tuition from industry professionals and a Monkey Lord host!! What more do you want?? www.monkeyfest2010.com

Monkey Fest 2010 "The festival for guitarists" 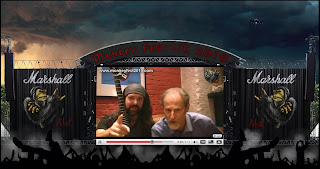 Eddie Kramer will be launching Monkey Fest and then giving a talk/clinic about what it's like to work with Jimi Hendrix, Steve Vai, Eric Clapton and many other great guitar players! Monkey Fest will be held in Wiltshire, UK from 27th - 29th Aug, tons of guitarists from all over the world will meet, drink beer, eat food, learn, shred and sleep in tents...

Monkey Fest is sponsored by Marshall Amps, Faith Acoustic Guitars and the ICMP.