Guthrie Govan: what would you want for Christmas? 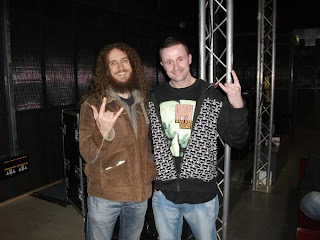 Guthrie Govan, a well known fan of Shawn Lane... probably did not put this on his Christmas list, but the devoted fan of Shawn Lane, Wiljay, decided to wrap a mega present for Guthrie. Wiljay presented the surprise package at a recent clinic in the UK.

Yep, i gave him 95 Shawn Lane dvd's. :-D .... Iedited/tidied up most of them, and re-authored (with menu) all except 2 of them. It would have been about 100 dvd's originally, but i combined a few of them onto sigle discs were you had multiple versions of the same gig, so long as they would fit on a single disc.

Guthrie has done a few nice magazine articles on Shawn over the years, so i suppose it's my way to partly thank him, and also, if he ever gets asked to do any more, he'll now have much more of Shawn's work to use as a reference if he needs to.

So may be we'll see some hybrid lane licks appearing in Guthrie's future clinics!

I like to thank god that people had the sense to video Shawn Lane playing and so we can relive those experiences of a towering colossus of fusion guitar... and it's great to see players using YouTube to record their guitar journey for the future generations. If you are unsure about posting your videos... remember you are only here once...
Guthrie Govan