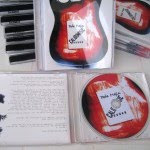 I’m very happy to inform everyone about the release of the new album Calidomusic….finally!. Some of the songs included in the album are well known in the page, but the album version is way batter in terms of sound and production. http://www.pedromejia.com/

Calidomusic it’s an all instrumental album divided in two phases: The white phase (from track 1 to 5) is mostly rock, and played with electric guitar, the dark phase is mostly acoustic music.

I played all instruments also recorded, produced and mixed the album. Mateo Kupstys (http://www.mateokch.co.nr) helped with the cover design.