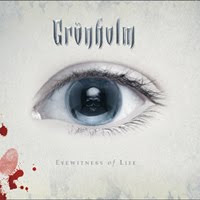 'Eyewitness Of Life’ is the debut album from a new act from Finland - enter Grönholm led by guitarist and song writer Mika Grönholm. The music of ‘Eyewitness Of Life’ is built with an appreciation for a number of metal genres yet there is a common theme of progressive orientated riffs throughout the album, however ‘Eyewitness Of Life’ avoids the monster shredding the genre is renowned for resulting in a more focused compact album for those that like strong songs first and foremost.

Nuances of artists such as Queensrÿche and Rush can be heard here and there, but the song is of main concern for Grönholm who also adds a few shades of other cultural sounds from Indian and Spanish music along with some jazz inspired progressions to add a little spice, yet the overall feel remains firmly in the metal camp and is easily accessible.