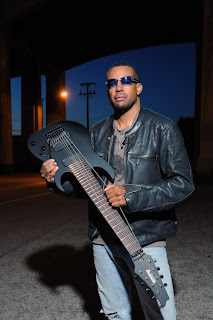 How is writing for Seven The Hardway different from writing your solo material?

Well, every vocal record is a lot different from any instrumental project that you’re gonna undertake, because you’re writing things that have different types of foundations for lyrics and melody lines. In that expanse it’s way different. The instrumental music is not really built along those lines. I always say it’s more of a sonata form. So it’s a much different approach but it’s something I’ve always enjoyed. It’s wonderful to work with these guys in that format. Mark’s such a wonderful singer, so it’s really a lot of fun.

Did you guys write independently? Together? Both?

Liar was a song that took a lot of different shapes and different turns. Working with [producer] Roy Z who produced it and got this thing together. There were a lot of midnight hour changes to that song and it was really quite a surprise to see where it started and where it ended up. We really enjoy that song also. It’s a double guitar lead song also, so it really should be exciting live. full interview

Hi Tony, before we get into the details of your equipment and technique, can you give Guitar Jar readers an insight to why you first picked up the guitar and how long you’ve been playing?
I got into Guitar from hearing my brother play constantly and hearing how he could slur and bend the notes was something of great interest to me. After some time he gave me my first Guitar and a played it and played it for hours.
In the first few years in learning the instrument, which guitarist(s) were you influenced by the most and why?
Johnny Winter and Rick Derringer were really among my very favourites. And years later I was much into the playing of George Benson and Allan Holdsworth. full guitarjar interview