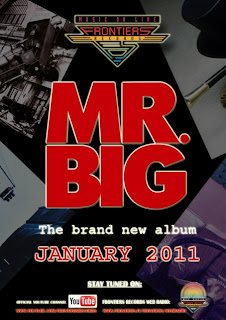 MR. BIG will release their new album in January 2011 via Frontiers Records. The band recently entered a Los Angeles-area studio with producer Kevin "The Caveman" Shirley.


"the forthcoming album will feature impossible bass and guitar stuff" and will be musically similar to the band's 1991 breakthrough, "Lean Into It" — the LP that featured the No. 1 single "To Be With You". more