Well here I am in sunny (ok may be not so sunny) Milan and I get a chance to see Steve Lukather and his jam band in a real live Italian blues club, Jazz On Live http://www.jazzonlive.it/ . Imagine Ronny Scott's club, with tables and food and good Italian wine, all capped off with a great jam session from Steve and his jamming band. I like this club! This show does not cover tracks from his new release, but follows a more extended jam format of the sort you would see and hear at the Baked Potato in the USA. So classic tracks get a mean work out with Steve coaxing Jeff Beck style wonderment from his instrument but more than fully supported by his guest soloists with include Steve Weingart (incredible keyboard flurries) and the bass and drums like a machine!!!


get to see this band live, they are amazing!

Steve's got a bad cold but he still puts every amount of effort into his live performance, looking good too having lost some weight after quitting the demon drink and drugs... I for one will be going out to get his new CD. 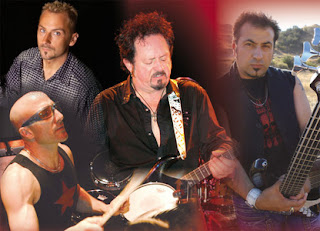