November 03, 2010
Get along to see Christophe Godin in Folkestone... this guy and his band are amazing! 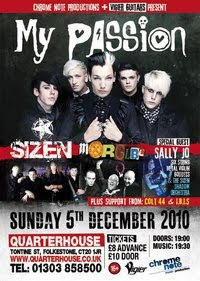 The last show of the tour, this promises to be an extra special night.

My Passion who were nominated for Best British Newcomer at The Kerrang! Awards and in 2010 toured the UK and Ireland on the Kerrang! Relentless Energy Tour will be fresh from their UK tour to promote their latest album. Simon Rowlands, bassist for My Passion is one of most recent artists to join the Vigier artist roster. My Passion are renowned for their full out, tight and energetic performances.

Morglbl, back to the UK for the third consecutive year will blow you away with their killer musicianship, faultless stage craft and wacky French humour. Christophe Godin is renowned as one of Frances best guitarists, his virtuosic guitar skills and sense of humour has meant he is in high demand across the world. Ivan Rougny, bassist for Morglbl also plays Vigier, his formidable technique contributes to his unique playing style, which stretches the sonic boundaries of the bass guitar.

Sizen received rave reviews from Metal Hammer, Rock Sound, Big Cheese & Power Play, which was topped off by a 4 ‘K’ review for their debut album ‘What Do You See’ in Kerrang! Vigier guitars endorsee Dudley Ross joined the band in September 2008 and since then there has been no looking back. Sizen are currently in the studio working on their highly anticipated second album as well as completing a busy schedule of shows in the UK and abroad. As a one off special for this evening, Sizen will be joined by Sally Jo, six string metal violinist & the Sizen Shadow Orchestra.

Based in France, Vigier's luthiers started out with the ambitious goal of creating the best guitars in the world. With a focus on design, material and build quality, the numerous awards they've won suggests Vigier are at least near to their goal. Other Vigier artists include Ron Thal (Guns’n’Roses), Roger Glover (Deep Purple), Stanley Jordan, Geezer Butler (Black Sabbath) and Shawn Lane. The hand crafted instruments are in their 30th year Vigier and are going from strength to strength. Renowned for innovating the guitar, Vigier have revolutionised the guitar building industry with their carbon fibre technology as well as a desire to create beautifully hand crafted instruments with exceptional attention to detail.