Magnus Olsson: seriously injured in accident... Why God, Why? 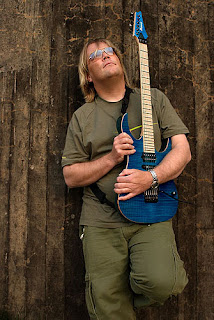 My best wishes and get wells go out to Magnus Olsson who has been badly injured in an accident earlier this week. Magnus has slipped over on ice and badly broken his shoulder. The damage done has left Magnus unable to play guitar for at least the next couple of months according to doctors treating the likable fusion star. Upcoming clinics are likely to be covered by other players. Magnus will undergo surgery to rectify the problems.

Magnus explains the details of his shoulder operation:

The operation are that they will screw in plastic for the part that are gone now. I probably (and hopefully) get the operation on Thursday... I can move it a little and my fingers work fine as long as I don't move the shoulder.
I can even play a little if I get the guitar in the right position, but it is stupid to try more than I already have.

I have talked to 3 doctors and all say that I will be good, no lasting problems.
The last I heard are that it will take a month after operation to get well enough to start to play.

I know all guitar fans will want to wish Magnus all the best for a speedy recovery and I'll be following the ongoing saga.

Why God, Why? Magnus Olsson