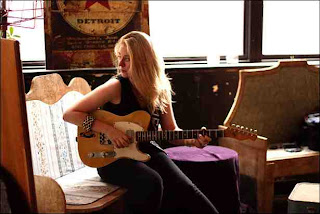 Following her acclaimed performances supporting Black Country Communion at their debut UK concerts in December 2010, up and coming blues-rocker Joanne Shaw Taylor returns to the UK in May 2011 to undertake a full-scale nationwide tour of her own.
Celebrated by Classic Rock magazine, Shaw Taylor is fast becoming a name to watch in the British Blues scene. Having won ‘British Female Vocalist of the Year’ at the British Blues Awards 2010, Taylor also received a ‘Best New Artist’ nomination for her debut album “White Sugar”. Shaw Taylor will perform music from her debut, alongside tracks taken from 2010’s follow-up “Diamonds in the Dirt”.
Dates on the May 2011 UK tour include; Wolverhampton Robin (May 17), Buxton Opera House (May 18), Edinburgh Caves (May 20), Glasgow o2 Academy (May 21), Aberdeen Lemon Tree (May 22), York Opera House (May 23), Newcastle o2 Academy (May 25), Sheffield o2 Academy (May 27), Manchester Academy (May 28), Bristol Tunnels (May 29), London Islington o2 Academy (May 31); Tickets are available from 0871 230 1101 and www.seetickets.com. 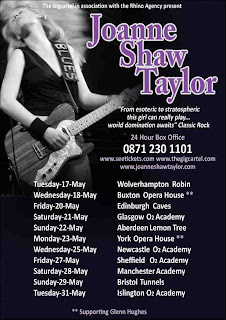