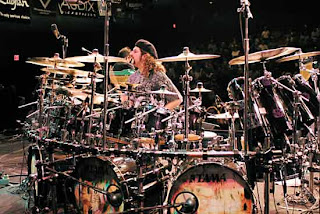 DREAM THEATER, the band held three days of auditions in New York City. Over an amazing and productive three-day period, the band played, jammed and spoke candidly with seven of the world's greatest drummers, learning about them musically, personally and professionally, and assessing the fit of each drummer's incredible chops with the band's trademark prog-rock sound.

DREAM THEATER have been extremely sensitive to the fact that this is not only a monumental decision in their own lives, but also a critical moment in the lives of their fans around the world. "The departure of our lifelong bandmate and friend was an unexpected and truly heartbreaking blow," says guitarist John Petrucci. "The fact that as a result of that event we'd be introduced to seven infinitely capable and uniquely talented drummers was heartening."

DREAM THEATER would like to share with its fans some of the intense process, along with the musical joy, that went into choosing a new drummer.

So who is the best fit behind the kit?