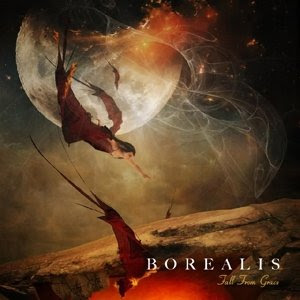 
Pre-orders taken now (will not ship before 13th May 2011) at http://www.lionmusic.com/cd/fallfromgrace.htm

With soaring vocals, lightning fast guitars and a rock solid backline, BOREALIS is bringing leather back and dragging power metal up with it. It's been that way from the start for these Canadian guys: all or nothing, and it shows in their music.

Musically, BOREALIS leans towards the classic power metal sound; not too far removed from bands such as Evergrey or even Savatage in their prime. Also, the more progressive bands like Vanden Plas or Dream Theater occasionally spring to mind. It's all about energy, aggression, melodies and finesse - and BOREALIS has it all in spades.

With an independently released debut "World Of Silence" safely in the bag, the band took it upon themselves to give ProgPower USA one heck of a kick-start when they visited the world famous festival in September 2010. With a 45 minute set comprised of songs from both the upcoming disc "Fall From Grace" as well as their debut, they made sure all 1,100 people in attendance would leave with a positive memory of BOREALIS.

"Fall From Grace" sees Borealis take a heavier approach for their label debut along with a more mature and progressive spin put on the songs when compared to their first appearance, but the bands song writing process in which every idea is explored and considered has not changed. On the new material bassist Jamie Smith comments, "We feel that because of song writing process this is a very diverse, energetic album. Lyrically, a few avenues were explored for the album, taking a more 'real life' approach than was taken before. Again, a collaborative effort on the lyrics ensured that they fit the music perfectly and reflected every band member's tastes in their own way".

Produced and mixed by Jodan Valeriote in Ontario, Canada and mastered by Tomas Johansson at the world famous Panic Room Studios in Sweden (known for a.o. Scar Symmetry, Warrior Soul, Miseration), this album is a sonic masterpiece. And topped by the fantastic artwork by Frank Fiedler, the entire package comes off as one of this year's most impressive power metal releases.

Borealis' forthcoming offering "Fall From Grace" is sure to see the buzz generated by both their debut album and ProgPower USA performance continue, and will certainly reach a larger audience world-wide come 20th May 2011 on Lion Music.

BOREALIS - Where we started (OFFICIAL VIDEO)