Jeff Kollman: auctioning off four of his guitars on eBay for Japan!! 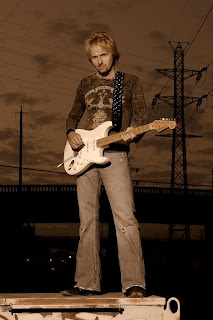 Acclaimed L.A.-based guitarist Jeff Kollman (COSMOSQUAD, BOMBASTIC MEATBATS, GLENN HUGHES, MOGG/WAY) is auctioning off four of his guitars on eBay http://shop.ebay.com/i.html?_nkw=jeff+kollman+owned&_sacat=0&_odkw=jeff+kollman+guitar&_osacat=0&_trksid=p3286.c0.m270.l1313 with part of the proceeds going to a Japanese tsunami relief fund.
The guitars up for auction are a 1968 Gibson Les Paul Special (used on the recordings of 'Numena' and 'The Long Walk Goodbye'off COSMOSQUAD - 'Acid Test'), an original 1974 hard tail Fender Strat (featured in the COSMOSQUAD - 'Lights, Camera, Squad!!' DVD and virtually every Kollman release since 1995), a Wes Montgomery-style 1948 Gibson L7 (used on the recording of'Dr. Blotter & Miss Purple (Ride in the Echoplex)' from the BOMBASTIC MEATBATS - 'More Meat' CD), and a first yearIbanez AS 50 semi-hollow body Gibson 335 style. "I've accumulated a lot of gear, including guitars, over the years and it's time to thin the herd a bit so to speak. At the same time I wanted to give back to the people of Japan who've supported my musical endeavors going back to my EDWIN DARE days", states Kollman. "When that massive earthquake and ensuing tsunami hit it really made me think. I played Sendai with COSMOSQUAD and twice with the BOMBASTIC MEATBATS recently and to think that parts of the city are now virtually destroyed is simply mindboggling. We could've easily been there when the tsunami hit and people that have come out to support us are now left without a home."

In addition, Kollman's instrumental trio, COSMOSQUAD, featuring drummer Shane Gaalaas (B'z, MSG, GLENN HUGHES, ULI ROTH) and bassist Ric Fierabracci (FRANK GAMBALE, DAVE WECKL, PLANET X), have just announced a benefit show for Japan which is scheduled for May 27 at the Baked Potato in Studio City, California http://www.thebakedpotato.com/ . The band will be joined by a number of friends and special guests. More details to come.