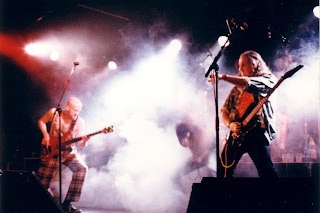 When the eighties hit Will started to play in bands, the most successful of which was LAFORDOVA. That band saw a worldwide album release with 1999’s “Circus of the Damned”, opened shows for Vanden Plas, Hammerfall and Paul di’Anno’s Battlezone and even went on tour with King’s X.

When Lafordova’s record company went belly-up, Will decided it was time to do what he always wanted, to start a solo career concentrating on instrumental guitar music..

In 2006 Will launched his website that included three songs that were free to download, “Hypervertion”, “Everything is 1.618!!” and “I Saw Pygmalion the Other Day”. The response was overwhelming.

Just one year later Will became the first Dutch guitar player to become a teacher for the international Shred Academy.

In 2008, right after becoming a member of the Shred For Charity Foundation, Will released his first solo album “Weapons of Mass Seduction” and again downloads ran in the thousands. He also put out his first instruction videos and again the views ran in the five digit numbers almost overnight. At the end of that same year Will even got his own signature guitar, a precision high-powered axe built by master builder Patrick Koopman.

In 2009 things even picked up a pace or two, Will appeared in a PK promo video and his studio was featured in Interface Magazine. At the end of 2009 Will’s version of the Charlie Daniels song “The Devil Went Down to Georgia” was placed on the website of Dutch national Radio and just around Christmas Will’s second solo album “Hidden in Reality” was released, again it was free to download and again thousands of people did.

When Will became a father on January 3rd of 2010 he tried to slow things down but didn’t quite succeed. He appeared on the “Let There Be Rock” radioshow and became the subject of a competition in the Dutch rockmagazine Aardschok where you could actually win a free guitarlesson by Will as well as a trip to the shop where Will’s signature guitar is built.

Putting even more on his plate, he became a columnist for the international guitarmagazine GitaarPlus, talking about a different exotic scale every month. Also he became an official Axe-FX (by Fractal Audio) user, probably the most impressive guitar related product to hit the market since the instrument went electric ages ago.

In September of that same year the number of visitors to Will’s site crosses the mythically number of 100,000. Dutch national radio puts yet another cover of Will on their website, this time a song originally by George Baker called “Little Green Bag” and Will releases his third solo album, “Blueprints For a Timetravel Paradox”. However, the songs on this album aren’t new recordings but rather remasters of earlier recordings dating back to 2005, 2000 and even as far as 1993. This didn’t scare the public; again download figures are extremely impressing.

Now in 2011 Will is working on a new album with all new compositions and recordings. The album is due to be released before January 1st 2012 and is titled “Chupacabra Farm”. Future plans include the release of (partly vintage) videos, more free to download music and collaborations with some rather famous musicians from all over the world.

Outside Tapping by Will Schut


Economy Sweeping by Will Schut