But for real fans... you'll want the real deal... touched by Andy's tippity tapping hands! God yes I must have this

Andy James has undeniably earned his place among the best Shred/Metal guitarists in the World. This is your chance, if like us you love to get your hands on a physical copy of an artist's music, to pre-order his brand new album... ... personally signed by 'those hands'! The album has already received magnanimous praise from the industry and music-lovers alike and is the must-have album of the year for both a technical fix and those that love to escape into their Metal! 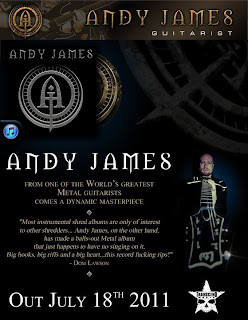