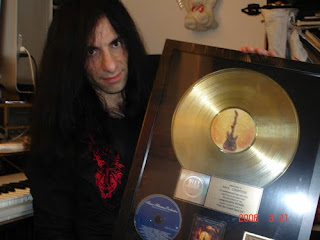 Mike Campese - I have met many, many famous musicians over the years. Some are down to earth and some are not. I noticed some of the greatest musicians are the most down to earth. I would have to say meeting Ronnie Dio or Eric Johnson was a great experience for me. They are both the nicest people, Ronnie James Dio gave me a big hug when we met and was real nice. I remember when I met Eric Johnson a while ago back stage and I started walking towards him and he saw me and walked over to me and we were talking for a while. He was really interested what I had to say about his performance and his tone. He kept asking me questions about his sound like my opinion mattered. The point of this is, these guys are open to the people and are down to earth. That is a big reason why they are so great, I'm sure Jimi Hendrix would be the same way if I was around to meet him. more