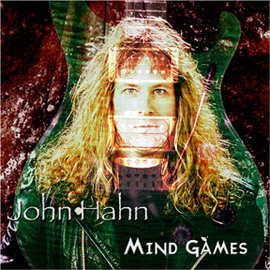 A chance to pick up some earlier material: John Hahn, "Mind Games" - John Hahn, along with many other top notch guitarists have all recorded Cds that start out with the same bass and drum tracks. Then each guitarist lays down his own unique and original guitar tracks over the bass and drums. No player hears the other tracks before they have finished with their own Cd. Each player has his own Guitar Masters Cd as well as compilation Cds that has each player playing against the same tracks. It really is an eye opener to hear how each player attacks these tracks. buy

This CD, like its predecessor features John’s unique guitar voice and approach as he attacks the tracks; from tasteful melodic passages to blazing high-speed shred combining structure, freeform jamming and elegant modal phrasings, he tears up each track

Plus John is working on a new release


I am thrilled to announce that all tracking, mixing and mastering has been completed for my next instrumental CD titled "Darkness Falls". I'm shooting for a mid 2011 release. The vibe of this CD is a bit darker, heavier, and more progressive and than my previous releases with tons of guitar. I've managed to capture some of my best tones and performances on this release. This disc nails all the characteristics that I look for and love to hear in an instrumental guitar release and was lots of fun to write and record.