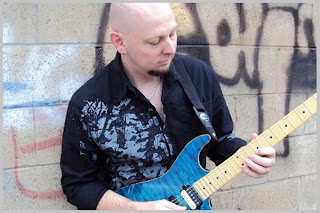 The new album is sounding awesome, Chris Brooks on top form and now an interview with my buddies over at Live 4 Guitar.

Thanks Levi. I really appreciate you guys getting behind the new album.

Why dont we open with you telling the readers a little bit about the album and where they can get it from?

“The Axis of All Things” is my second solo instrumental album. A few years back I decided I was in the right place to make another album, and I really just wanted to write a bunch of cool guitar songs, regardless of the style that came out. I realised that some of my best ideas came up while jamming or practicing rather than consciously writing, so it started there, and of course then I went into “structure mode” to put them together. My first album was very big on guitar/keyboard interplay like a Liquid Tension Experiment sort of thing, but this is very guitar oriented and goes into different styles, like funk-fusion, acoustic, even the odd country lick, and lots of rock of course. www.chrisbrooks.com is the best portal for people to buy direct from or see where else it’s available.

You're certainly right that the tune "The Axis of All Things" has that "first song" vibe - and you mention the hat tip to Garsed in your thoughts on that track - Garsed is a clear influence on the album, could you tell us a little more about what impact Brett has had on your playing?

Brett, like all my biggest influences, has been one of those aural influences where I’ve subconsciously absorbed a certain sound or preference for delivery of a phrase, especially as I get older, without actually learning what’s going on with his lines – which coincidently how I think it is for him and Allan Holdsworth. But there was this lick on his last DVD that was like a two octave power chord played as single notes, with a 9th thrown in on the way down. I wondered what it would sound like to move that around a chord progression, and that’s how the title track “Axis…” started.

Brett is one of the most important guitarists to come out of Australia, and my first-ever hero on the guitar. He influenced a multitude of guys over here, and when he first started making waves overseas, he brought a new technique set to fruition, as well as an innovative approach to bringing “playing over changes” to rock music, both of which have become the standard for rock/fusion players today, and I wish more people realised that. I am by no means an evolved fusion player. I am (hopefully!) a rock player bringing a few cool sounds and approaches to the way I play rock, and the roots of that lie with Brett’s achievements on the guitar. full interview