Not one, but two?!?You have got to take your hat off to the supremely talented Mr Hutchings. His Jazzy Jams Series 1 package has been one of the biggest sellers of 2011, and Alex has decided to complete the series by introducing sequels 2 and 3 at the same time! What a wonderful chap (and his playing is pretty sublime too!).
Alex explains in his interview that the whole Jazzy Jams series is based on standard progressions, so that any guitarist of any level can learn how to play Jazz tracks. Alex also mentions that he has slowed down the tempo of the changes in the new tracks to give players more time to play the scales. Genius.

It is only fair that you get a sneak preview of the new tracks....check it out by clicking here.
In the meantime, if you haven't already then check out Alex's existing packages. We have just put together a bundle of his 3 Custom Fusion packages on special offer for an amazing £34.99, saving you over 35%! That's 15 tracks, videos, solo tracks, solo backing tracks, extended jam tracks and completely accurate TAB in both standard and Alex's alternate EADGCF tuning. Now that's a bargain! 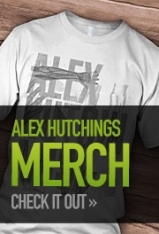