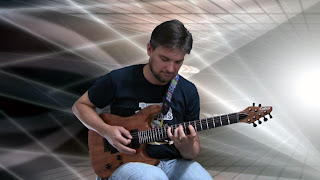 Over the years of teaching I've found that many students struggle with visualizing scale patterns. In this two and a half hour dual DVD set I cover exercises that I have developed that will help you to see the entire scale matrix in your minds eye or as you look at the fretboard. This will enable you to create patterns that you might not normally play and traverse the fretboard in any direction with virtually no boundaries. If you learn a new pattern you will be able to see the diatonic development superimposed on the scale matrix. This is useful not only in improvisation but composition as well. I also cover common yet essential tools every guitarist should use such as string dampening, motion efficiency, and proper angles for achieving a greater reach. In addition to this I will show you exercises that will help you develop finger independence, speed, accuracy, and endurance. Most examples include large, on screen neck diagrams to make it super easy to follow along.