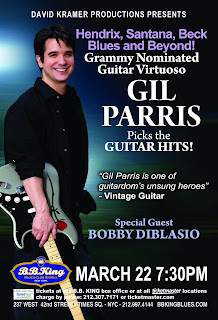 Yes. Last year, I went to a guitar festival -- they call them guitar shows -- where there's hundreds of guitars and people selling guitars. I was walking around and I went past this guitarist who was playing and I hovered around and thought, 'This is really nice,' and I went down a bit further and looked at some other guitarists. When I came back I did the same thing; I hovered around and then I looked down and it was a guy called Gil Parris, an American guitarist. He's got a video out. He plays kind of fusion, bluesy stuff. I thought, 'This is really lovely.' So I stopped for a bit and said, 'Hi.' And he said, 'Wow' (laughs). And we had a chat. I feel, in a way, I have a great position I always dreamed I might have. This other side, apart from being known as a guitarist, is that with other guitarists, we might become friends and we kind of get on because of what we do. When I meet up with guitarists like that, I make a little contact. They send me CDs. So there's a little bit of that. more